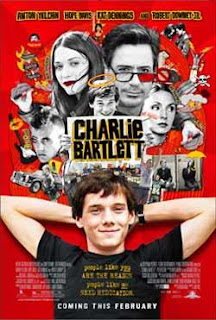 I've had the pleasure of watching a couple of movies this past week that are worth mentioning. The first one is "Charlie Barlett" which was actually released last year but has resurfaced in the wake of the "Juno" success. Who, really, can get enough of sarcastic youths? I can't. And I certainly cannot get enough of Robert Downey, Jr...especially in the role of a school principal. Good stuff. Check it out.

"Charlie Bartlett (Anton Yelchin) has been kicked out of every private school he ever attended. And now that he’s moved on to public school, he’s simply getting pummeled. But when Charlie discovers that the kids who surround him are secretly in desperate need, his entrepreneurial spirit takes over. Charlie becomes an underground, not to mention under-aged, shrink who listens to the private confessions of his schoolmates, and makes the imprudent decision to hand out the pills he’s proffered from his own psychiatric sessions. Then, Charlie Bartlett makes his big mistake: falling in love with the beautiful and bold daughter (Kat Dennings) of the school’s increasingly disenchanted Principal (Robert Downey, Jr.), who is hot on his trail. As Charlie Bartlett’s world and fledgling psychiatric practice unravel, he begins to discover there’s a whole lot more to making a difference than handing out pills."

The second movie I had the pleasure of seeing yesterday was "Definitely, Maybe." I was in that chickflick mood and thoroughly expected some mega cheese scenarios in this movie. Alas, to my shock, I really enjoyed this movie. Even shed a tear. I was impressed by the storyline as I related to the twists and turns Ryan Reynold's character's lovelife took. Of course, my crush on Ryan Reynolds has intensified ten fold. Boys, take your date to this movie and you're golden. Here's the review and a scene from the movie.

"Will Hayes (Ryan Reynolds), a thirtysomething Manhattanite, is in the middle of divorce proceedings when his young daughter (Abigail Breslin) asks him about his life before marriage, including how he met and fell in love with her mother. Will flashes back to 1992 and recounts his romances with three women, changing their names so that his daughter must guess which one became his wife."

I promise I'll review an art flick next week. After I see "The Other Boleyn Girl", of course. [GRIN]