Go See This Show in Chelsea... 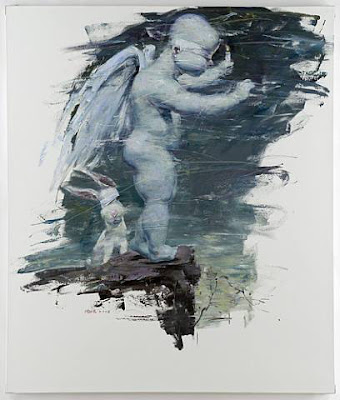 Once in a while, I run across an artist that is actually saying something rather than creating your typical "couch art" or something just superficially "pretty" and nonthreatening to the cerebellum. Feng Shuo, a young Chinese painter from Beijing, is one of those artists. As I walked through the Marlborough Gallery in Chelsea, I was captivated by the sculptures that often were the subject matter of his large scale paintings. I was also surprised at just how "European" and illustrative his work was, refreshing in this era of the contrasting "photo real" and what I call splash and dab art. Granted, I suppose his work could be considered dark as some of the people I went to the open with considered it so, but "dark" makes you think. And remember, art is supposed to make you think. Good art, anyway.

"At first glance, one may feel that Feng’s works are too soft or too graphic, too elementary or even too cute, but upon closer examination this first impression quickly gives way to solemn realizations of grave irony, and sometimes even distress and despair. He is not a slave to novelty or gimmick; he rejects the “culture of reaction” as well as the homogenizing effects of mass technology. One can recognize in him the thought expressed by Roland Barthes: “Suddenly, I became indifferent to not being modern.” The strength of Feng Shuo rests in his absolute sincerity as an artist. His calligraphic brush strokes slide and cut freely and fluidly across the canvas. The empty space surrounding his subjects creates a window allowing us to peer deeply into his universe, where eerie flashbacks of his dreams and nightmares reveal recurring themes of sadness, alienation, and anger."-excerpt from Marlborough Gallery press release.

I couldn't find many examples of Feng's work online but for this and a few. There are many more complex pieces in the gallery. I highly suggest you check it out. His show is up until May 17th.