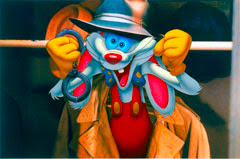 For all of you kids out there that work in sfx and animation like I do, this is going to be an interesting lecture/conversation.

"A three-time Academy Award winner—for Special Achievement and for Visual Effects as the director of animation of the Walt Disney/Steven Spielberg blockbuster Who Framed Roger Rabbit (1988), and for his short film A Christmas Carol (1971)—Richard Williams discusses his long and influential career in a conversation with animation filmmaker and historian (and fellow Oscar-winner) John Canemaker. Born in Toronto in 1933, Williams became one of the finest animation filmmakers of the late twentieth century and has been a mentor to countless others. During the 1970s, his London-based studio created scores of stunningly crafted, award-winning commercials, titles, short films, and television specials. Not content with these successes, Williams then went on to hire veteran animators from the Disney studio's "Golden Age" and from Warner Bros. Cartoons, most notably Grim Natwick (Snow White), Art Babbitt (Fantasia), and Ken Harris (Bugs Bunny). He also learned from his friends Milt Kahl (Pinocchio, The Jungle Book), and Frank Thomas (Bambi, Cinderella). A distillation of his acquired knowledge went into the exuberant (and sexy) animation he directed for Who Framed Roger Rabbit and, most recently, into an unparalleled and indispensable series of instructional DVD master classes based on his bestselling book The Animator's Survival Kit."

Illustrated with clips from Who Framed Roger Rabbit, The Charge of the Light Brigade, A Christmas Carol, Raggedy Ann & Andy, the animated titles from The Return of the Pink Panther, award-winning commercials, segments from The Animator's Survival Kit, and more. Program 100 min.
Monday, September 22, 2008, 7:00 p.m., Theater 2, T2